On 6th June 1944 Dad was with the 2nd Fife and Forfar Yeomanry ready to take part in the D Day landings, he wrote a letter full of love and concern for  Eba and their 4 month old baby Gregor of whom he is 'immensely proud and adores’.

His brother Kitchie had been missing since leaving in a Lancaster for Dortmund on 23rd  May 1944,(he  had been shot down in Belgium but no one knew of his death for months). Eba’s brother Ian was wounded and seriously ill, he died later that year, her other brothers were on active service, Norman was in the merchant navy (aboard the Empire Gray and made 10 trips to Normandy during the landings), Stanley was in the East African Command and Donald was with the Cold Stream Guards, her youngest brother Teddy was too young to be called up. Uncle Mac was serving in Italy and Grandpa was with The Royal Artillery based at Stirling Castle.

Although this  was standard family life during that time it must have been so tricky for all involved to keep stumm about Operation Overlord, the secret was well kept. I can't imagine the strain of being unable to tell those you loved that you were about to engage in such a massive and bloody conflict.


The crossing was postponed and The 2nd Fife and Forfar Yeomanry arrived on the Normandy Coast on 10th June 1944. Dad was injured on June 30th near Norrey en Bessin but news of him didn’t reach Eba until after she had received a 'missing in action telegram'. She was able to visit him in hospital and  they spent time together until he returned to active service.

Like many, Dad wouldn’t talk about his war experiences, he wanted to pick up and enjoy life. He survived being at Dunkirk 26th May to 4th June 1940 and wouldn’t be drawn on that topic either.

Eba also lived her life in the present, looking to the future, she didn’t celebrate V.E. Day either and told me that this was because behind every front door throughout the world someone was grieving.

the next generations
~ missing from the party are Victoria and her son Max,
Eba's great niece Caitlin was visiting from Canada

Every family needs an embarrassing uncle. 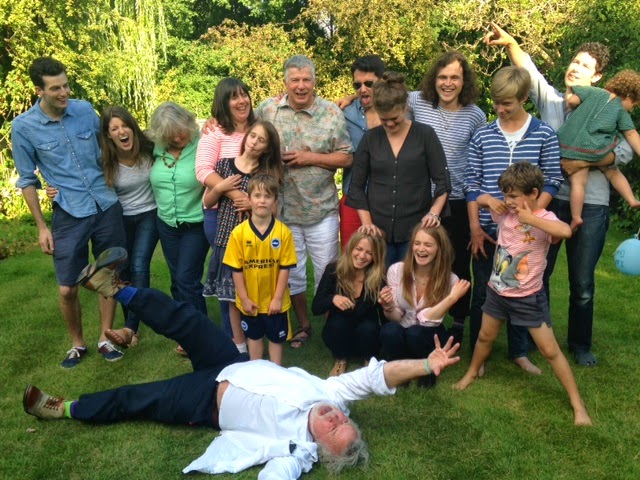 To pay my respects and record my gratitude and love for my parents.